Visitors to the Detroit Zoo are always excited when they are able to see baby animals.  Babies are adorable, and are often playful and fun to watch.  Chimpanzee Jane is no exception – she is now 15 months old and can be seen climbing in the trees in her habitat and encouraging the older chimps to play with her. Hana, a female Japanese macaque, is only 5 months old, but is already moving away from her mother and exploring the rocks and branches of her habitat.

It’s not always possible for zoo babies to be cared for by their mothers for various reasons, and occasionally animal care staff have to step in and assist.  When this happens, babies are often cared for in the animal hospital nursery, where they can be given the intensive care they need to grow and thrive.  In the nursery, veterinary and zookeeper staff caregivers can provide round-the-clock feeding and attention. 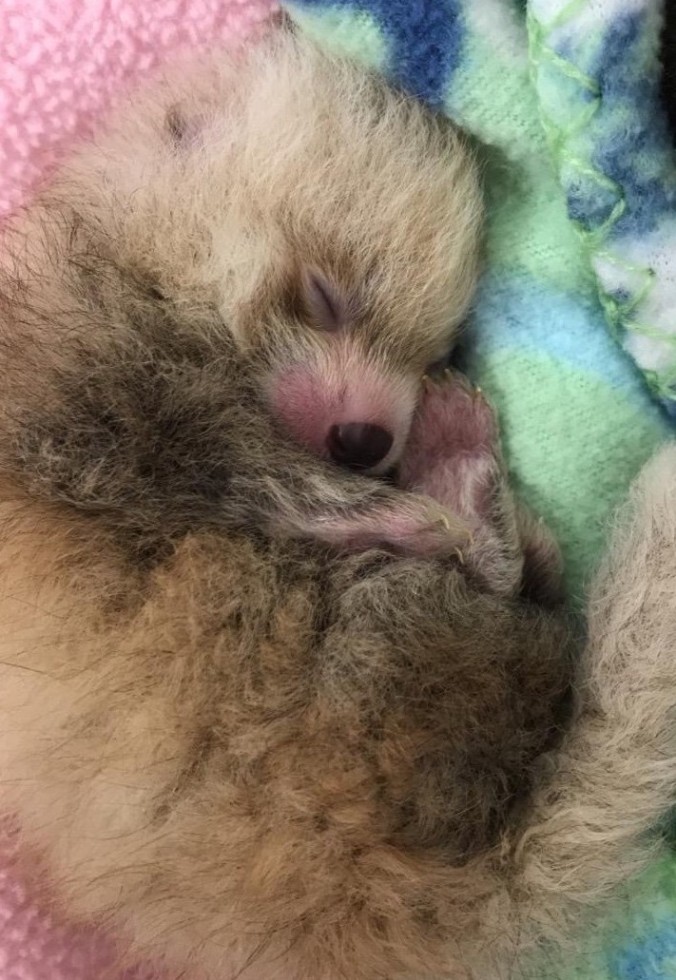 Over the years, we have had the pleasure of caring for a number of adorable babies, but in my opinion our current nursery resident – a female red panda cub – is arguably the most adorable animal in Detroit Zoo history.  She was born July 6, and weighed 112 grams (around 4 ounces), a good weight for a red panda cub.  While the cub’s mother Ash was pregnant, she allowed us to ultrasound her abdomen while she happily ate treats, so we knew she was pregnant with a single cub that was growing well.  Ash delivered the baby with no problems, and showed the newborn lots of attention, but this was her first pregnancy, and she didn’t have all of the skills needed to raise the cub.  Red panda cubs have been hand-reared at several zoos, including the Detroit Zoo, and we had prepared in advance to care for the panda cub, just in case.  A hand-rearing manual that compiles collective experiences of zoo professionals was used to determine the formula and feeding schedule and help to develop a care plan.

The cub was placed in an incubator that provided a warm, humidified environment, and was given round-the-clock care.  Her formula was offered in a small bottle with a nipple used for premature human babies, and during her first days she was given only 3-4 milliliters at a time. At each feed, we used a warm, moistened cotton ball to stimulate her to urinate and defecate.  We fed her eight times each day, and by one week she had gained 19 grams.  By two weeks, she only needed to be fed seven times a day and had nearly doubled her birth weight.  When she was a few weeks old, we were concerned that she might have a respiratory infection, but since then she has remained healthy and has continued to grow and become more curious about her environment.  At 5 weeks old, we warmed up the nursery room and moved her to a covered playpen so she could have room to move and play with toys.  A month later she was ready to be moved to an even larger area, and to be given access to climbing structures, bamboo to chew and manipulate, and bowls of formula mixed with adult diet.  She was given the name Keti, meaning “girl” in Nepali, and her caretakers spent time with her each day, encouraging her to climb and explore.

Keti is now more than half the size of an adult red panda, and spends time outside in an area designed to encourage her to play and practice her climbing skills.  She is also becoming acclimated to the colder temperatures.  Eventually she will be moved to a habitat where visitors can watch her continue to grow and get experience climbing and traveling at greater heights.  When proficient, she will be ready to join Ash, dad Ravi and grandma Ta-Shi in the Holtzman Wildlife Foundation Red Panda Forest.

– Dr. Ann Duncan is the director of animal health for the Detroit Zoological Society and oversees the Ruth Roby Glancy Animal Health Complex.