A selfie or photo with an exotic animal may take only a second to snap and it may even win you a few “likes” on social media, but if you could see the world through the eyes of that animal, you probably wouldn’t want to take the picture. Animals who are taken from the wild or are bred in captivity to become tourist attractions in unaccredited roadside or traveling zoos are often kept chained, isolated, fed inadequate diets, denied veterinary care and/or drugged – for their entire life. The main concern for the individuals and companies who keep these animals isn’t animal well-being but rather, the bottom line.

The good news is that people are becoming more aware of the reality of these situations. In late 2016, for example, TripAdvisor made the decision to stop selling tickets for elephant rides, swim-with-dolphin experiences and attractions that allow people to pet tigers and other exotic animals. This was the result of a campaign launched by World Animal Protection showing that these animal tourist attractions cause psychological and physical trauma, shorten the animals’ lives and also result in even more animals being taken from the wild.

In December of 2017, Instagram began notifying people of potential behind-the-scenes animal abuse for a wide range of wildlife hashtags. If you search for “#slothselfie”, for example, a message will pop up that states, “Animal abuse and the sale of endangered animals or their parts is not allowed on Instagram. You are searching for a hashtag that may be associated with posts that encourage harmful behavior to animals or the environment.” You then have the option to be routed to their website to learn more about wildlife exploitation. 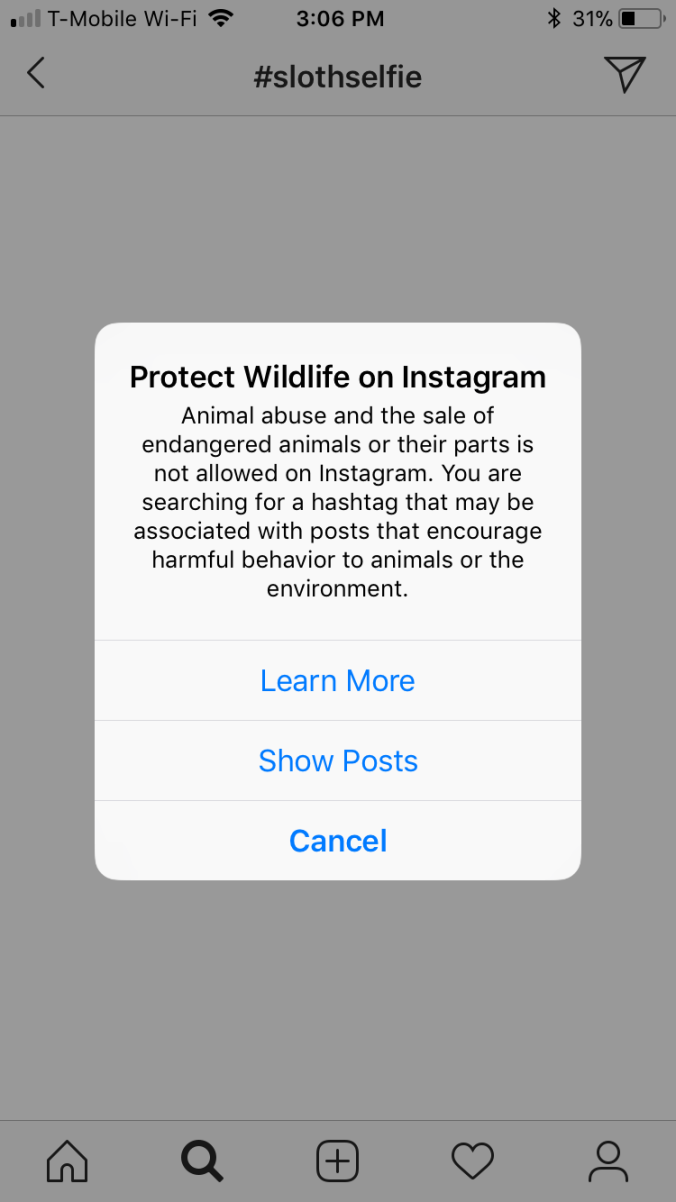 In October of 2017, World Animal Protection launched the Wildlife Selfie Code campaign, asking people to commit to taking “cruelty-free selfies” in the Amazon rainforest. They’re asking people to take a pledge on their website to “help filter wildlife cruelty out of tourism, and make sure your voice is heard”. Again, this is another opportunity for us to further spread awareness of the reality behind these animal tourist attractions.

These animal photo ops are often thought of as things that happen abroad. You might be surprised to learn that these incidents occur in the Metro Detroit area as well. Just this summer, a local festival announced that they were planning to have tigers at their event, offering photo opportunities. After significant pressure from the public, they decided to forego the tiger attraction. This is a great reminder that we shouldn’t be afraid to speak up! Collectively, our voices and actions truly do make a difference.

The next time you see an animal being forced to perform or interact with people, ask yourself:

Always remember to take photos of wildlife from a distance, without disturbing them, in their natural habitat. If ever you have concerns about the well-being an animal that you encounter being forced to perform or interact with people, document what you see and report the situation to the appropriate authorities. Together, we can make a positive difference in the lives animals.

– Lisa Forzley is the curator of humane education for the Detroit Zoological Society and oversees the Berman Academy for Humane Education.