Detroit Zoological Society (DZS) staff are studying how the Southern white rhinoceroses who live at the Detroit Zoo respond to different types of stimuli and how this may influence their welfare. Rhinos have a well-developed sense of hearing and can hear noise frequencies lower than the average human can. Sounds may also be up to twice as loud to them as they are to us. This means that the way the world sounds to a rhino is very different than what we hear. In comparison to their auditory capabilities, their eyesight is believed to be relatively poor. This may mean that they are less able to discern objects around them and that things that happen in their environment might be more startling to them. As our sensory abilities differ from those of rhinos, we have to work to increase our understanding of what environmental factors are meaningful to them. The question isn’t just what is it like to be a rhino living at the Detroit Zoo, but what is it like to be a rhino at the Detroit Zoo experiencing great welfare? 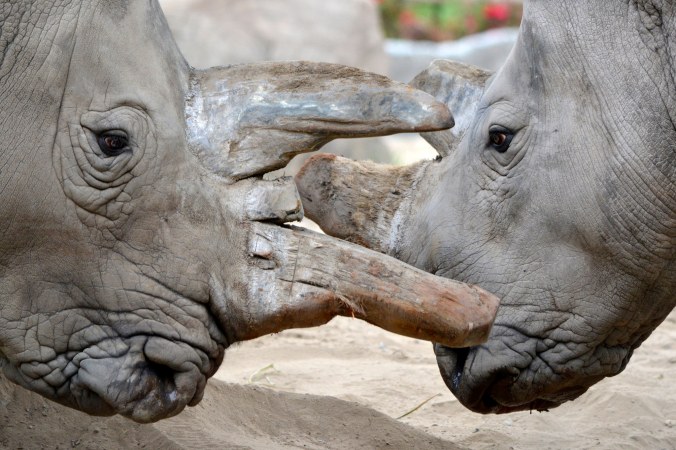 We began observing Tamba and Jasiri in 2017, both inside their building and in the outdoor habitat. We explored differences in their behavior between these spaces and in conjunction with the number of visitors present. We noted that the rhinos showed increased signs of positive welfare when presented with more choices in their visual and auditory environment. Based on this information, we designed a study to investigate specific factors that may affect the well-being of the rhinos inside their building, including stimuli from visitors. In this space, noises are amplified and the rhinos are in closer proximity to visitors, compared to their outdoor habitat.

The study took place in four phases between December of 2017 and February of 2018. During the first phase, no changes were made, allowing us to obtain baseline behavior and hormone levels for the rhinos. This gives us a point of comparison to assess any effects of changes we make. In the second phase, we increased the distance between the rhinos and visitors using a rope barrier. The larger buffer space changed both the visual and auditory environment for the rhinos by having visitors further away without reducing the amount of space available to the rhinos. During the third phase, we added large sound abatement panels, which reduce noise levels through added insulation, along the back wall of the visitor area and in the space occupied by the rhinos. Finally, in the last phase, we installed additional visual barriers, providing the rhinos with the choice to block their view of visitors.

During each phase, we collected behavioral data and fecal samples daily. Changes in behavior and concentrations of corticosterone in the fecal samples help us decipher how the rhinos responded to the changes we made. We are currently analyzing all of this data, and so far, it appears that both rhinos showed increased behavioral diversity – which is a measure of the variety and frequency of behaviors – with the modifications that were made. Animals demonstrating higher behavioral diversity are believed to be experiencing better welfare as they are more motivated to engage in a larger number of behaviors. This may be a reflection of an environment that better meets the animals’ needs.

For Jasiri and Tamba, one of the behaviors that increased in frequency is what we call object manipulation. The rhinos spend time interacting with various objects provided to them to stimulate them both physically and mentally. Both rhinos definitely like their “back scratcher” and Tamba is partial to making bells chime! This may seem counterintuitive if noise levels can impact their well-being, but it really is about choice. Tamba is in control of making those sounds – when and for how long – which is very different than having to listen to sounds you don’t enjoy. Jennifer Hamilton, DZS animal welfare programs coordinator, explains it really well. As she says, imagine that you are at a stoplight and someone in the car next to you is blasting music that you don’t like – how does that make you feel? However, when a song you do like comes on the radio, you might just turn up the volume. The good thing is that Jasiri doesn’t seem to mind any of Tamba’s “concerts”! The rhinos also spent more time investigating their indoor habitat, which they do by smelling and moving around more. This is a space they know well, so this increase in activity isn’t due to novelty. This may instead be telling us that they were more comfortable in their habitat. We also noted a new social behavior we had not previously observed.  Rhinos often spar with one another, locking horns to determine dominance. Tamba and Jasiri would rest while standing with their horns together, without any other movement typical of sparring. Although we aren’t sure what this “horn holding” means, we are interpreting it as a friendly and positive social behavior. Once we have the full results, we will be better informed about environmental features that enhance rhinoceros welfare. When we apply what we learn, we can have a direct impact on making sure Tamba and Jasiri are thriving.

– Dr. Stephanie Allard is the director of animal welfare for the Detroit Zoological Society and oversees the Center for Zoo and Aquarium Animal Welfare and Ethics.

One thought on “Animal Welfare: Sounds and Sights in the World of Rhinos”