The Detroit Zoological Society (DZS) has a long history of leadership in the areas of penguin conservation and penguin health. In recent years, we have been collaborating with Falklands Conservation (FC), an organization working to understand the threats impacting wild penguin and sea bird populations in the Falkland Islands. 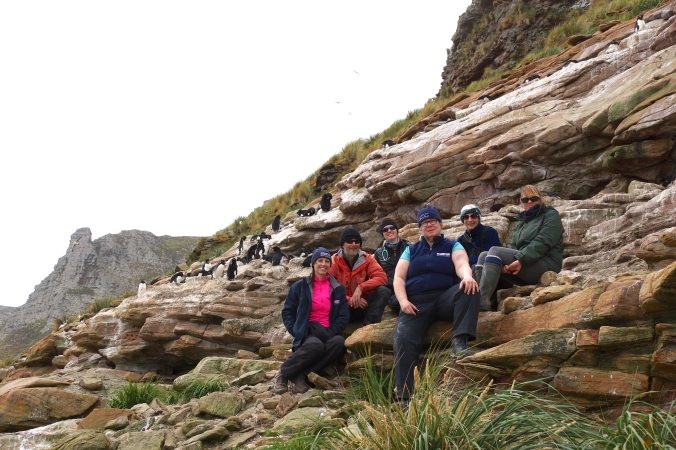 In early 2018, the DZS was asked to develop a project that would explore the impacts of infectious disease, pollution and tourism on these populations. When monitoring birds as part of their study, the folks with FC often noticed sick penguins, but they didn’t have the resources locally to investigate the causes of this illness. The DZS has incredible expertise in the areas of penguin health, handling, behavior and welfare. We also practice compassionate conservation, so we knew we could develop field techniques that would minimize the amount of handling required as well as the stress it may cause the animals.

And so began the most comprehensive study of the health and welfare of a wild population of animals the DZS has ever undertaken.

During the next eight months, we reached out to dozens of veterinarians, virologists, bacteriologists, toxicologists, welfare scientists and conservationists who were working on projects with similar goals in wild penguins, though not quite as comprehensive as ours. These conversations provided us with valuable information that helped inform our own project. We also discovered that over the past 5-10 years, testing has advanced in ways that would allow many unanswered questions to be investigated. With the right partners and execution, we had an opportunity to do some important work, and to tackle some of the goals that had been recently established by the International Union for the Conservation of Nature, the world’s leader in the conservation of plants and animals.

To meet the project goals, we would be sending samples to four different laboratories and gathering as much information as possible within the scope of our resources. We would focus on new testing capabilities and our strengths as leaders in animal welfare. For example, at the Detroit Zoo’s Polk Penguin Conservation Center, we’ve discovered that a particular blood test is often more useful for identifying penguins fighting infection or toxicological problems than the more traditional ones used for other species. We also planned to use a test that looks for the DNA of germs causing disease, which prior research did not include and would strengthen the science considerably.

Lastly, we are fortunate to have developed an on-site endocrinology lab at the Detroit Zoo, specializing in the science of animal welfare. Our team at the Center for Zoo and Aquarium Animal Welfare and Ethics has incorporated cutting-edge testing to measure the potential impacts of disease and exposure to environmental toxins and humans by measuring stress hormones and damage to DNA, which has been linked to chronic stress.

Once we had our “to do” list, it was time to plan the logistics. The Falkland Islands are extremely remote; therefore, conducting this research was going to have its challenges. We would be collecting and storing samples on beaches and rock ledges, far from the hospital setting we are used to at the Detroit Zoo’s Ruth Roby Glancy Animal Health Complex.

Stay tuned for more details about this incredible project in an upcoming blog entry.