Is there anything sweeter than making a new friend? Keti and 14-year-old Ta-Shi have become quite the dynamic duo in recent weeks.

Keti, who is the offspring of 4-year-old mother, Ash, and 3-year-old father, Ravi, was hand-reared after birth by Detroit Zoological staff. Ash was a young first-time mother and a bit unsure of how to properly care for her newborn. It’s not unusual for this to occur; zoo babies do occasionally have to be cared for by staff for various reasons.

After four months of close observation in the DZS nursery, Keti was encouraged to play and learn on her own in a grassy habitat adjacent to the Holtzman Wildlife Foundation Red Panda Forest.

Keti quickly became confident in her abilities — and then it was time for another first: a grand introduction.

Recently, Keti was introduced to Ta-Shi in the grassy habitat. Ta, who has reared cubs multiple times, appeared curious and switched on her maternal instincts during her first meeting with the now 6-month-old. Keti seemed incredibly eager to be around another red panda and quickly took to Ta. 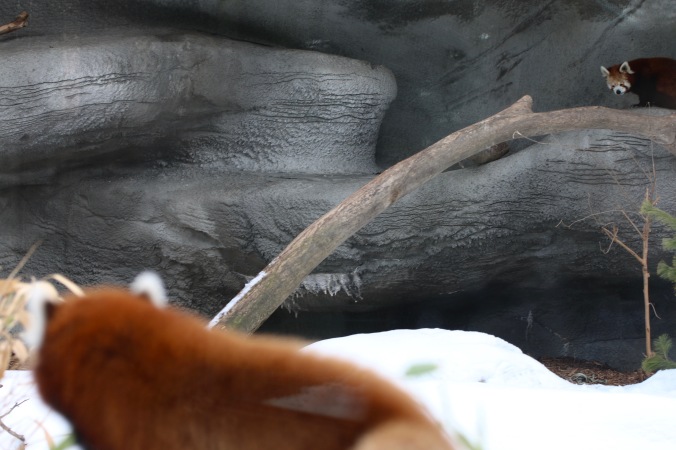 A good companion and mentor, Ta is teaching Keti her manners — and, in a way, helping her potty train. In the wild, red pandas go to the bathroom in a specific area, similar to how a cat uses a litter box. Ta has now shown Keti where the “bathroom” is located.

The pair appear to be getting along well and last week, they were even caught snuggling.

Keti and Ta will eventually be moved to the Holtzman Wildlife Foundation Red Panda Forest to join neighbors, Ash and Ravi.

Ash and Ravi are approaching breeding season, so Keti will remain separated from them as this is the normal period when red panda babies leave their mothers in the wild.

In other words, Keti will get to spend even more quality time with her new faithful friend.

-Alexandra Bahou is communications manager for the Detroit Zoological Society