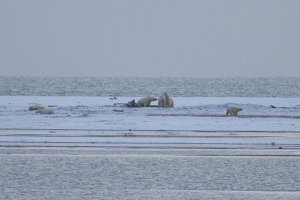 The goal is to go out on a small boat to get closer to the polar bears but we must wait and see if conditions will allow for it. 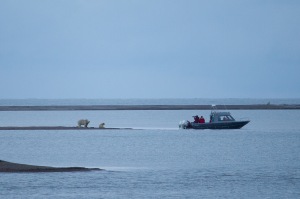 In the afternoon, I joined staff from the United States Geological Survey to visit a local school to discuss polar bear research. I also had a chance to discuss my work in Nepal and China with snow leopards and red pandas with one of the classes.  I learned local Inupiat dances. I also found so many great Detroit connections – one of the Arctic Refuge staff is from Livonia, two of the teachers here are from Detroit, and I met a Detroit Zoological Society Renaissance Circle member on vacation here.  And one more Michigan connection:  There was an Alaska Fish and Wildlife researcher originally from Muskegon; she was stuck in Prudhoe Bay waiting for the weather to clear to census polar bears by helicopter.

At night, we went to the bone pile, which is the remains from the recent bowhead whale harvest, and we saw several bears scavenging. We learned to never walk outside at night because of polar bears in town.  Every night there is a polar bear patrol to scare away bears in town that might be feeding on whale meat scraps or dog feed and pose a potential threat to humans.  I heard two shots right before I went to bead a couple hundred meters from our house and this morning saw some huge tracks from the bear.