My trip to Nepal has been very productive because I’ve had some great meetings with our Nepali colleagues. They had recently returned from setting camera traps for snow leopards and musk deer in the Himalayas of northwest Nepal. There have been some recent deaths from blizzards and avalanches at nearby Annapurna so I was very relieved to hear they were all right and had a productive trip. The camera traps will allow us to get pictures of snow leopards and the animals they prey on, like musk deer and blue sheep, to allow us to estimate the snow leopard population in the Api Nampa Conservation Area.

I was eager to get out in the field myself, though, and it was a fantastic day today setting a few camera traps at Shivapuri National Park adjacent to Kathmandu. 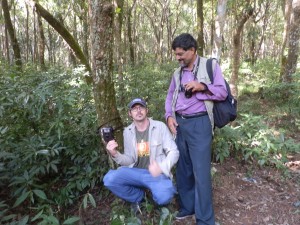 We set two of the traps near tracks of leopard, wild boar and sambar deer so we are hopeful to get some pictures of leopards. It was also nice because we saw troops of macaques and several interesting birds. I also heard about a leopard or leopards that have been killing livestock and dogs around the U.S. embassy so learning more about leopard ecology in Shivapuri and Kathmandu is essential to avoiding human-leopard conflict. 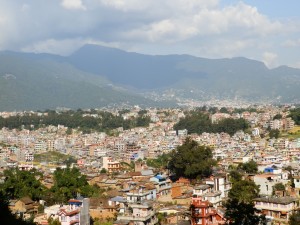 The only challenges today were the mosquitoes and the few remaining leeches in the forest. My next step is to go to Lao PDR to check on a project that is also using camera traps to document the wildlife remaining around Luang Namtha, northern Lao PDR and improve eco-tourism, so it’s a red-eye tonight to Hong Kong than another red-eye to Luang Namtha via Hanoi and Vientiane.