Since 2007, the Detroit Zoological Society 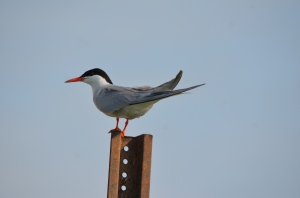 has been working to restore the population of common terns on the Detroit River, and more recently on Lake St. Clair. DZS staff monitor, improve and create suitable nesting habitats respectively on Grosse Ile, Belle Isle and the restored lighthouses on Lake St. Clair through a partnership with the Save Our South Channel Lights organization. Each year, staff members also attach colored leg bands to common tern chicks to monitor their movements in the Great Lakes.

In early July, several staff members successfully attached leg bands to more than 30 chicks at one of the lighthouses on Lake St. Clair. Gathering the flightless chicks is a hazardous time for staff as the adult terns swoop down to protect their young. Amid the squawking adult terns, DZS staff quickly and gently placed several chicks at a time into small holding corrals. Other staff then attached leg bands promptly and efficiently to avoid undue discomfort to the chicks. The chicks were then released close to where they were collected to avoid additional stress. A total of 118 chicks have been banded by DZS staff over the last two years. 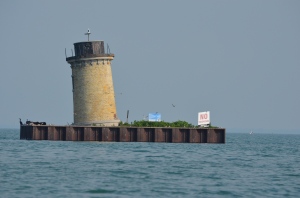 This year’s high water has also delayed the life cycles of many animals – including common terns – and more than 100 eggs still remained to hatch when we banded the first chicks on July 1. DZS staff will continue banding and monitoring to enhance common tern conservation.