From his first moments on Earth, a tiny piping plover nicknamed Smalls required round-the-clock care. He had difficulty hatching, experienced issues with his umbilical cord, developed a crooked toe, and caregivers were concerned he may have eye problems. He also remained quite small for his age as the days and weeks went on. Those who cared for him did so with determination as they focused on his recovery and development. Despite his many physical setbacks, Smalls survived, and has become a symbol of the power and importance of one.

Smalls is a part of a Detroit Zoological Society (DZS)-led conservation effort and captive-rearing program that is focused on increasing the population of piping plovers, an endangered species of shorebirds. Abandoned eggs are delivered to the University of Michigan Biological Station in Pellston, Mich., and the DZS oversees field workers from the Detroit Zoo and other Association of Zoos and Aquarium institutions who staff the facility May through August, monitoring the incubation period and caring for the chicks after they hatch. Once they are able to fly after about four weeks, the birds – that would have otherwise perished – are banded and released into the wild. As they migrate to their wintering grounds, the plovers are identified by birders and photographers who report their findings to the U.S. Fish and Wildlife Service. 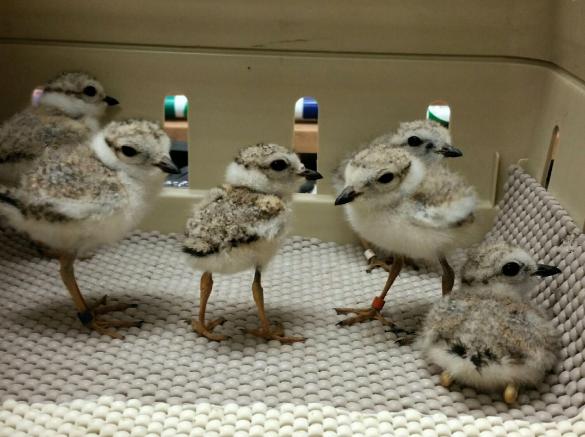 This summer, seven piping plover chicks were released from northern Michigan, and five have since been spotted by birders – one in South Carolina and four in Florida. DZS staff were especially thrilled to discover that Smalls was among those identified – he was photographed earlier this month by Pat and Doris Leary on a beach on Little Talbot Island in Florida. This tiny piping plover represents the importance of one and the DZS’s commitment to all the “ones” in its care, whether they are endangered or not. In Smalls’ case, being a part of an endangered species makes his significance even greater, since every individual is important to the recovery of Great Lakes piping plovers.

The Great Lakes population of piping plovers is now at 73 breeding pairs, setting a record of the highest number of wild pairs since the plovers were put on the endangered species list in 1985. The 207 captive-reared birds from the DZS program and their descendants have made a significant contribution to this small population.

There was an error retrieving images from Instagram. An attempt will be remade in a few minutes.