This has been an interesting trip indeed! We can normally get pretty close to the island of Purawa by boat, but this time, we ended up walking on what looked like a desert a mile long! When we finally got to the “green” part, it was equally as dry. We cut a path with a machete for the evening hike and waited for the sun to disappear. We saw some species of amphibians, but none that we would’ve hoped or expected to see. This island is uninhabited and usually has not only a large number of amphibians, but also a lot of different species. We often see an abundance of tree frogs and many smaller species perched in the grasses along the smaller ponds. This time there were almost no tree frogs and only a handful of toads. 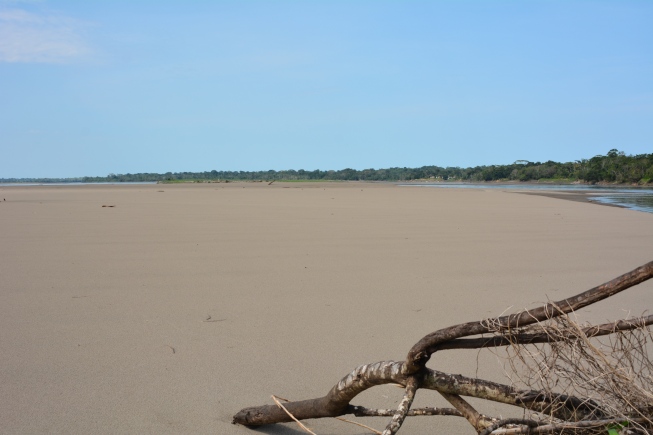 Days later, we made plans to meet with the Amazon Amphibian Protectors Club and take them out on a night hike. We have been working with these students for close to five years, and they have such a lovely appreciation for amphibians now, spreading the word to other students in their school. They are always thrilled to participate in an evening trip to learn about amphibians and potentially see different species than what they normally would. We chose an island that was close by the school and looked promising. The children found several toads until the professor announced that she heard rain. It took quite some time to get back to the boat and by then we were experiencing heavy rain and thunder. As we drove back to the school, several fish jumped in our boat. They were similar to what we have as sunfish or bluegill, and small and flat enough that I could toss them back into the water as quickly as they flew into the boat. I was thrilled I could toss them all back, but I may have been the only one that was.

I am a third of the way into my travels and have seen and heard less than I would have expected. I have tried to record in the evenings so I can determine if there are other species present. I place a digital recording device in an area where I can already hear calls, so that I can record and download the sounds
later. One night, there was silence – complete silence for what seemed like an hour though it turned out to be only 10 minutes. That is an unusual sound in the rainforest – hearing nothing at all. Lightning and thunder came on quickly, which may explain the brief silence. I was curious before but am now very interested to see what the remainder of the week will be like.

– Marcy Sieggreen is the curator of amphibians for the Detroit Zoological Society and is doing fieldwork in Peru, studying amphibians in the lower elevations of the Amazon River to see how they are faring with increased human populations and impacts in their habitats.

One thought on “Notes From the Field: Silence in the Amazon”