The Detroit Zoological Society (DZS) leads the Eastern massasauga rattlesnake Species Survival Plan (SSP), which is a comprehensive management plan through the Association of Zoos & Aquariums (AZA) that works to ensure the sustainability of healthy, genetically diverse and demographically varied captive animal populations. The DZS is also one of several organizations within the AZA that participates in a long-term study of a particular population of Eastern massasauga rattlesnakes in Michigan.

The Eastern massasauga rattlesnake is the mitten state’s only venomous viper, and is listed in Michigan as a species of special concern, which means it is threatened or endangered throughout its range. This SSP is a special one because each year, representatives from participating zoos attend a meeting in conjunction with an “in situ” study, which means that it takes place in the field.

This year marked our eighth monitoring a particular population of Eastern massasauga rattlesnakes in the southwest part of the state, and it was our best year to date – we found more than 100 snakes! This includes snakes that were found in previous years as well as newly identified individuals. The process involves gathering information on each snake in the field and then taking it to a lab where it is weighed and measured. We also determined if it is a male or a female and if female, whether it is pregnant (massasaugas give birth to live young). If the snake has never been found before, it is marked with a transponder tag – similar to those implanted in your pet dog or cat – so we can scan the animal and take measurements if it is found in the future. After the information has been gathered in the lab, the snake is then returned to the exact location where it was found. 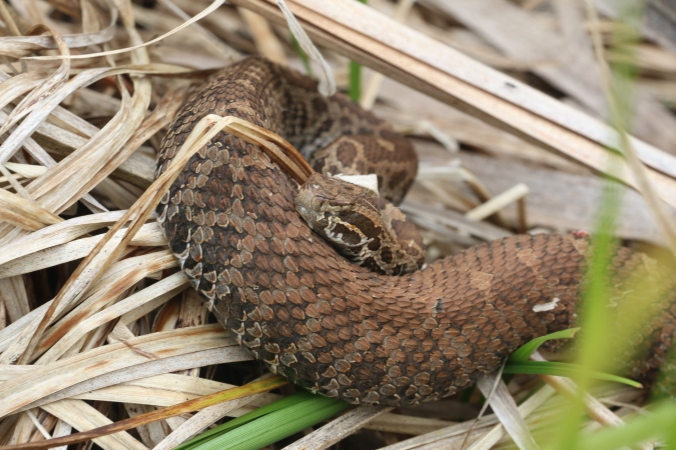 Monitoring a seemingly healthy population over time gives us insight into natural fluctuations of the population size, male-to-female sex ratio, individual growth rates and reproductive success. As years goes by, the data will also begin to tell us life history data such as longevity of the species and how old animals remain reproductively active. All of this information assists the AZA zoos in how they manage the captive population as well as the state departments of natural resources in their management of the wild populations and the lands on which they are found.