The Detroit Zoological Society (DZS) recently renovated the grizzly bear habitat at the Detroit Zoo, doubling the amount of outdoor and indoor space available to the three rescued brothers. Staff with the Center for Zoo and Aquarium Animal Welfare and Ethics are measuring changes in the bears’ activity budgets, behavioral diversity and fecal glucocorticoid concentrations to assess the impact of the expanded habitat. We will also be testing the efficacy of a biomarker of oxidative stress as a novel indicator of animal welfare.

The grizzly bears living at the Detroit Zoo, Mike, Thor and Boo, are brothers who were rescued in Alaska after their mother was killed by a poacher and the cubs began foraging too close to humans. At just a year old, they were too young to care for themselves and the DZS has been able to provide them with a safe place to grow up. The bears are now 7 years old and weigh approximately 900 pounds. With their inquisitive nature and significant strength, they frequently “redecorate” their habitat by moving logs around and digging in various locations. It became clear that they were outgrowing the habitat they called home since 2012. 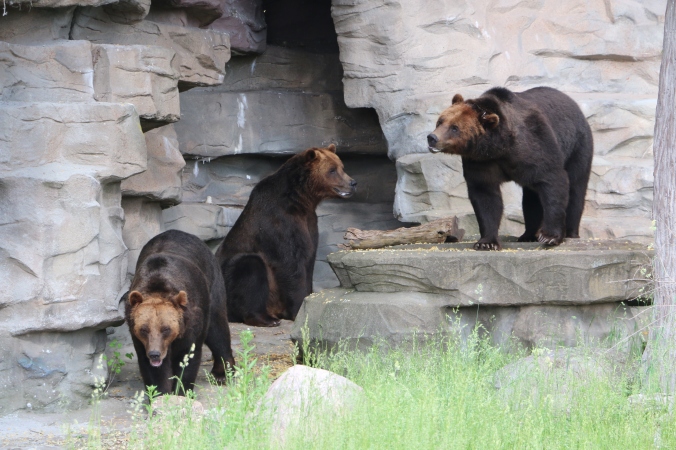 As part of the DZS’s commitment to ensuring individual animals experience great welfare, a significant expansion of the grizzly bears’ habitat is underway. Not only will this augment the amount of land space available to the bears, it will also provide them with new behavioral choices. They will have access to more features such as caves to provide cool, shaded areas. The larger habitat will also increase natural foraging opportunities for the bears.

When we make changes that affect the lives of animals, it is important that we understand how those changes impact them. To that end, we began collecting data last fall, prior to construction, to obtain a baseline of the bears’ behavior and hormone levels. Observations continued during construction and will end two months after the bears move back into their renovated home. Zookeepers have also been filling out daily surveys to add to the information we are gathering. Fecal samples are collected daily and these will be analyzed in our lab to measure hormone levels related to how the bears react to these changes. Using these different types of data in concert will increase our understanding of the expansion effect on the bears’ overall well-being.

Dr. Stephanie Allard is the director of animal welfare for the Detroit Zoological Society and oversees the Center for Zoo and Aquarium Animal Welfare and Ethics.